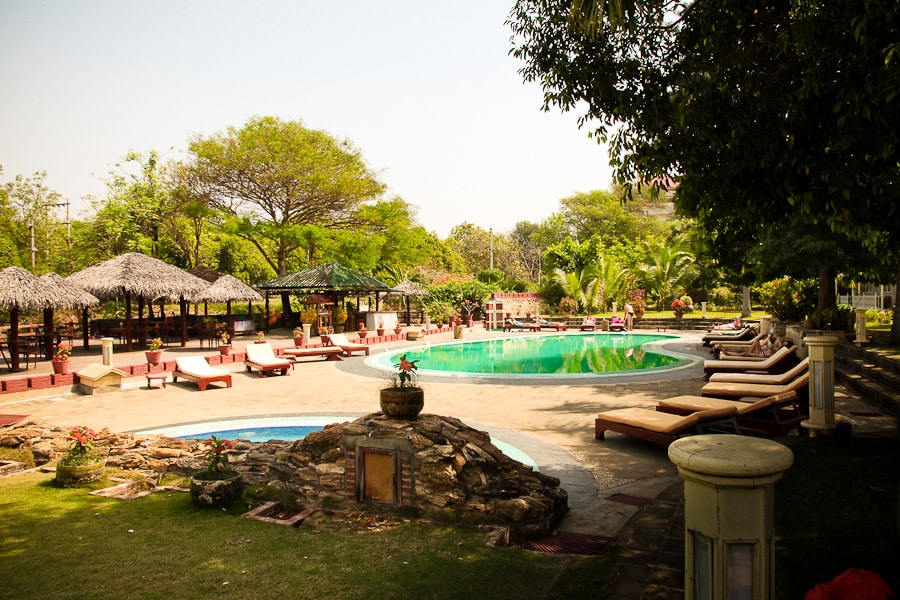 As the spotlight increases on Myanmar thanks to its first democratic elections in decades, tourism is sure to increase as sanctions are lifted and the outside world discovers this exciting and unusual asian country. Known to many as Burma, one of its highlights has always been Bagan. Often compared to Cambodia’s Angkor Wat temples, Bagan is also the land of temples and pagodas but it has something Angkor Wat doesn’t, sheer quantity. At Bagan’s peak there were over 10,000 monuments in this part of the Mandalay region. There are now around 2,200 still standing and they pepper the landscape as far as the eye can see.

As you’d expect from a country’s number 1 tourist hotspot there’s no shortage of hotels and no doubt more on the way as tourism increases. So where do you stay? We had the privilege of staying somewhere a little different, away from the new “strip” appearing in new Bagan. A short taxi ride from our river cruiser on the Ayeyarwady river, to the historical Thande Hotel in Old Bagan.

The Thande Hotel is one of the oldest hotels in the area, built in 1922. The main building, now a function room and restaurant was built for the Prince of Wales visit and is beautiful preserved, standing proud in the main area of the hotel. The 71 rooms are actually cute bungalows that are laid out across the grounds in a way which creates quiet gardens and courtyards, pathways and even a couple of small bridges over ponds. It creates a sense of calm and tranquility before you’ve even stepped foot in your room.  During the British rule of Burma, Pagan as it was once called became a popular tourist destination for aristocrats and seasoned travellers and the Bagan Archeological Department was formed, initially known as the “Burma Epigraphy Office” to preserve and restore the many temples and secure the artefacts. Since Myanmar’s independence in 1948 the Archeological department is now part of the Ministry of Culture.

The Thande Hotel is located right in the heart of Bagan’s Archeological zone. The 20 minute drive from New Bagan is breathtaking to say the least. Endless stupas, pagodas and temples rise up from the landscape, some in perfect condition, others crumbling in the baking sun of the dry season and torrential rain of the wet. The roads meander around the temples, getting larger the closer you get to the hotel. The last two buildings before the hotel driveway are the beautiful Gawdawpalin temple and the Bagan Archaeological Museum. Both worth checking out and just a short walk from your room too.

The bungalow style rooms of the Thande hotel are comfortable and traditionally laid out with everything you need for a good night’s sleep. While the decor has been around for a while, everything worked and was well-kept with a large bathroom and relaxing veranda with chairs and table to enjoy the gardens next to every room. The only noises you’ll hear at the hotel is the occasional bird singing or the put-put of boat engines in the distance. The pool is an absolute must after a hot day sightseeing and the friendly staff were on hand with refreshing drinks, the pool also has the Gawdawpalin temple looming over it so there’s always a great view of Bagan here. The hotel also has a spa which unusually is underneath the pool area, an unassuming set of steps and a small sign will point you in the right direction.

One of the highlights of the hotel is the outdoor restaurant area open for all meals of the day. A large area next to the river’s edge offers great views and ample dining space for all the guests. The large trees offer shade in the daytime and a place to hang lighting at night. In the evenings there’s often a show too including singing and traditional burmese puppets.

We had a wonderfully relaxing stay at the Thande and really appreciated it’s gardens, flowers, peace and quiet. Being so close to the temples and having historical buildings within the grounds creates a great atmosphere and as the guests are all here to explore the temples there’s a sense of common interest and excitement.

Thank you to Cox & Kings, the world’s longest established travel company, for arranging our stay at the Thande Old Bagan Hotel. For more information on luxury holidays in Burma visit their website.