What not to be missed in Madagascar 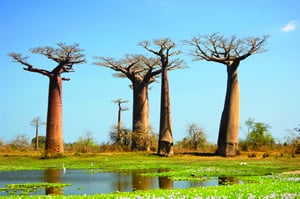 Best known for its variety of lemurs, endemic to the island, the experts at Cox & Kings give their top five other must-sees on Madagascar holidays.

Spend a morning wondering around a colourful and local Antandroy market.  Tourists can meander around the stalls, followed by only a few well-meaning and curious eyes. On offer are rubber shoes, medical supplies, cassava, plastic buckets, shiny football shirts cattle and even cattle.

Amongst the local village life and the paddy fields on the scenic (and bumpy) road from Fort Dauphin to Manafiafy are the pitcher plants, one of the most famous of the Malagasy orchids. There are at least. Pitcher plants, of which at least two species of pitcher plants found in Madagascar, trap prey in the cavity of the so-called cup. Madagascar plants are probably even more unique than the animals.  Of the 12,000 plant species on the island about 80% are endemic.

The Antandroy tribe, located in the south, is regarded as one of the fiercest and most traditional of Madagascar’s 18 tribes.  Like all Malagasy, the Antandroy are proud people steeped in traditions of ancestor worship and fady (taboos). When a member of the Antandroy dies the body is taken for burial in a predestined tomb deep in the heart of the sacred forest.  Some of the tombs are as big as 20m2 and each is individually decorated with items associated with the deceased’s favourite activities or interests.  When the burial takes place the zebu (African cattle) are slaughtered and their skulls decorate the tomb:  more skulls signify greater wealth.

A peaceful boat ride through the mangroves of Manafiafy, alive with colourful endemic birds, is a perfect way to enjoy the country’s unique vegetation. The still water provides a perfect mirror to reflect the prolific ‘Traveller’s Palm’ – a tree which can be used as an emergency drinking supply because the sheaths of the stems hold rainwater – and named because the enormous paddle-shaped leaves are shaped symmetrically in a distinctive fan.

Whales at Manafiafy can be seen from the beginning of June right up until late November, although the absolute best time is mid-August to mid-November.  From the whale watching tower just behind the beach at Manafiafy Beach & Rainforest Lodge, it’s possible to see the humped backs and flipping tails of the whales, but for an even closer, more thrilling experience, Cox & Kings recommend taking a boat trip. Humpback whales can also be seen on Sainte Marie Island (mid-July to September) on the Madagascar’s east coast.

See Cox & Kings’ website for details of tours to Madagascar.

A Caribbean Island to suit your travel style