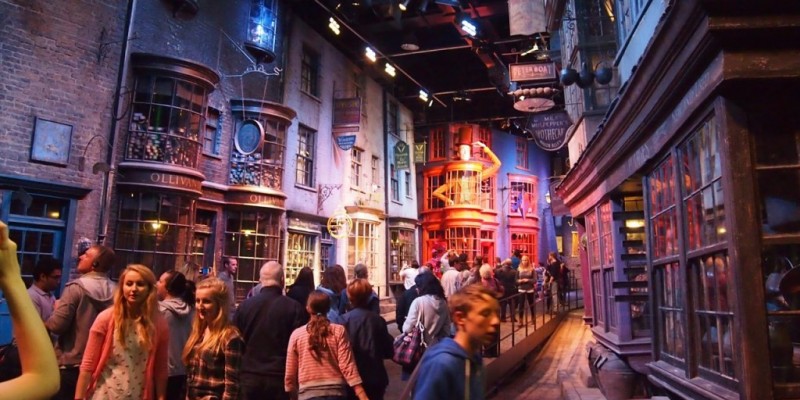 As every Harry Potter fan knows, the boy wizard created by JK Rowling celebrates his birthday on 31st July. Various places around the UK and the world including theme parks, studios and filming locations have tours and activities to help you celebrate with him!

Situated in the heart of Northumberland in the northeast of England Alnwick castle starred as Hogwarts School of Witchcraft and Wizardry in the first 2 of the Harry Potter Movies. The Castle  celebrates its association with The Boy Who Lived with a range of  activities throughout July. From broomstick lessons in the exact spot seen in Harry’s first lesson in the Philisophers Stone, to tours of the areas used as film sets, to fancy dress days, these can be enjoyed with the medieval treats celebrating the venue’s history.

Though its impossible to find Diagon alley without real or studio magic there are plenty of sights in London that have Potter associations. Kings Cross Station marks the spot where Harry goes off to school each term with a sign marking Platform 9 and 3/4. Only the true wizard can get access though. There is also a Harry Potter Shop selling memorabilia. Next door there is the amazing victorian edifice of St Pancras, seen in Harry Potter and the Chamber of Secrets when Harry and Ron take off in the flying Ford Anglia car to fly to Hogwarts. The River Thames and several of its landmarks featured strongly in the opening of The Order of the Phoenix as Death Eaters fly across the capital causing death and destruction, later Harry and his guard follow the course of the river on the way to 13 Grimauld Place. Walking the embankments or getting on board tourist river trips will show you Tower Bridge, HMS Belfast and other points of reference. Of course before Harry even knows he is a wizard he experiences magic when he sets a snake free in the Reptile House at London Zoo after having a short conversation with it!

For a vibrant experience of Harry Patter film wizardry the ultimate places to visit are the Warner Brothers Studio Tour celebration the Making of Harry Potter at Leavsedon Studios a little north of London or The Wizarding World of Harry Potter in Universal Studios Orlando Florida. These are experiences built by the studios who took the magic of Rowling’s books and made into fabulous experiences for fans of all ages. These locations aren’t cheap but are brilliantly realistic and should be visited as part of a big holiday or treat. Their official sites can be found below for informations and booking.

The origins of the magic

Of course the real magic is accessed easily wherever you choose to visit in July. Just visit your local book store and buy any of the 7 original books by J K Rowling. As soon as you open the pages, where ever you are in the world you will be transported to the most magical place of all. The imaginary world found through reading.