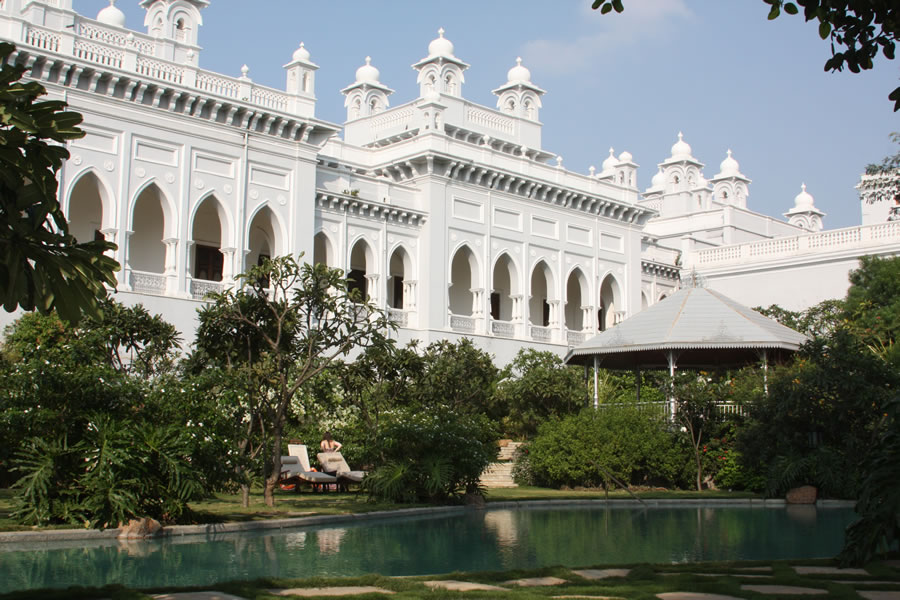 Having celebrated its first birthday on 13 November, Falaknuma Palace is arguably Taj Hotel’s most luxurious hotel in India. Cox & Kings, which specialises in arranging luxury holidays to India, was at the birthday celebrations and discovered more than just a hotel.

Perched 2000 feet above Hyderabad, Falaknuma Palace, ‘mirror of the sky’, is an oasis of calm away from the frenetic pace of city life below. From the arrival at the palace by horse and carriage to the attentive service of the personal butler, everyone is treated as a guest of the Nizam in his palace, not as a guest of a hotel. The library, which features a collection of almost 6,000 rare and antique books including an Encyclopaedia Britannica from 1910, is modelled on Windsor Castle’s and the rear facade resembles Buckingham Palace.

Originally built in 1894, it took 10 years to complete and cost 4 million rupees. Falaknuma Palace was the official residence of Nizam VI until 1911 and was then the royal guesthouse until the 1950s. Underthe careful guidance of Princess Esra Jah, Taj Hotels took 10 years to painstakingly restore the palace. The façade was painted over 60 times to ensure the colour perfectly mirrored the sky. The hotel is like being in a stately home but guests are free to explore each of the rooms either on their own or with the palace’s own historian. There is no lobby, but a discreet reception hidden off the Nizam’s study. Immaculately dressed staff are always close by to assist with any manner of questions but never noticeable until you need them.

Each baluster on the suspended marble staircase was designed differently as the Nizam didn’t want to ever get bored climbing his stairs. His exquisite dining room seats 101 guests and his suspicious nature mind meant the acoustics of the room were designed so that he could hear a conversation at either end of the long table when he was sat in the middle. The ornate inlaid furniture, fine Jade collection, rich French tapestries and intricate frescos give the palace a distinctive Baroque style. Burroughs and Watts, an English billiard table manufacturer, designed two identical tables. One is in Falaknuma Palace; the other is at Buckingham Palace. The original marking system for the table is still used, as are the Nizam’s cues, which guests are free to use.

The Jiva spa has three treatment rooms overlooking the beautiful gardens and offers a range of royal treatments and signature therapies using traditional Indian therapies. There are two restaurants: Adaa serving authentic Hyderabadi cuisine such as its famous Biryani, and Celeste which serves Mediterranean food. Afternoon tea can, and should, be taken on the Jade Terrace, which overlooks the city.

Rediscover the lost charm and allure of a long-gone era and relive the history of Hyderabad and its Nizams in this exceptional heritage hotel.

Cox & Kings, which was established in India in 1758, can include a stay at Falaknuma Palace as part of any tailor-made holiday to India.