Experience the Calgary Stampede in Canada

July sees ‘The Greatest Show on Earth’ roll into town as Calgary hosts the annual Calgary Stampede. Celebrating its centenary year in 2012, the Stampede is one of the largest and best attended rodeos in the world and is certainly an experience you won’t want to miss. Here’s my guide to Calgary and its stampede.

Alberta is known as Canada’s ‘Cowboy country’ and Calgary it’s ‘cowtown’. The province’s cities have a unique blend of city life and a country air to provide an electric atmosphere. Calgary’s landscape is a prime example of this, dominated by the nearby Rocky Mountains and the Calgary Tower. Standing at 626ft tall, the tower gives fantastic panoramic views across the city and comes complete with a revolving restaurant and a clear glass floor which I wasn’t quite brave enough to stand on!

For the sports fans, visit Olympic Park which was the site of the 1988 Winter Games. These games are best remembered for the Jamaican Bobsleigh team who were immortalised in the film ‘Cool Runnings’. During the summer, you can take a trip down the bobsleigh runs, mountain bike or ride a zipline as well as visit the Canadian Sports Hall of Fame here. To celebrate Canadian heritage, visit the Glenbow Museum which has a fantastic First Nations Exhibition and also Heritage Park which gives a fantastic experience of early life on the Prairies.

The Calgary Stampede welcomes over 1 million visitors each year and runs for 10 days during the first two weeks of July. The stampede’s main attraction is the hosting of its famous rodeo competitions in which professional cowboys put their traditional skills to the test. Here you can see the boys ride bulls, wrestle steers and ride a bucking bronco whilst the girls show their skill barrel racing, completing figure of eights at lightning speeds. There’s also the Rangeland Derby, the most famous chuckwagon race in the world to enjoy. The competition is fierce at the stampede so I can certainly guarantee you an electric atmosphere.

There is more to stampede than just the Rodeo. Start your morning by visiting Rope Square, located on Olympic Plaza, for the perfect introduction to stampede and Albertan hospitality. Grab a free pancake breakfast from one of the many chuckwagons that line the street before enjoying the activities in the square, including taking part in a hat stomp! See the Indian Parade and take part in some Square Dancing, before heading off to the Stampede Park. Here you’ll find amusement rides, bars, restaurants, live music and the exhibition which features the very best of agriculture, farming and traditional crafts. Calgary’s arena, the impressive Saddledome is also located here and throughout stampede, hosts many headlining acts. For more information on this year’s events, visit calgarystampede.com

Gateway to the Rockies

Hire a car and take a trip out into the nearby Rocky Mountains for the experience of a lifetime. In the space of an hours drive, you’ll find yourself seemingly a million miles away from the city and surrounded by sheer natural beauty. The closest crossing point into the Rockies is Kananaskis Country which is home to many Provincial Parks and reserves.

Drive through Banff National Park and you have your pick of wonders to choose to stop off at.  I would definitely recommend visiting Cascade Mountain and taking a ride on the Banff Gondola. Then make a point of visiting Lake Louise, beautifully surrounded by mountains and forest to provide a perfect  picture postcard view. Throughout your time in the park, keep your eyes peeled for a whole host of natives as bears, moose and eagles roam free and always appear when you least expect them to. 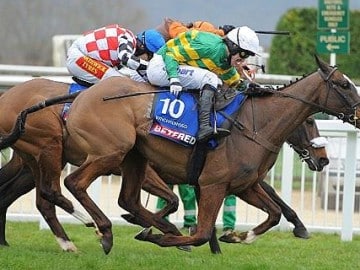 Reasons to visit the Cheltenham Festival