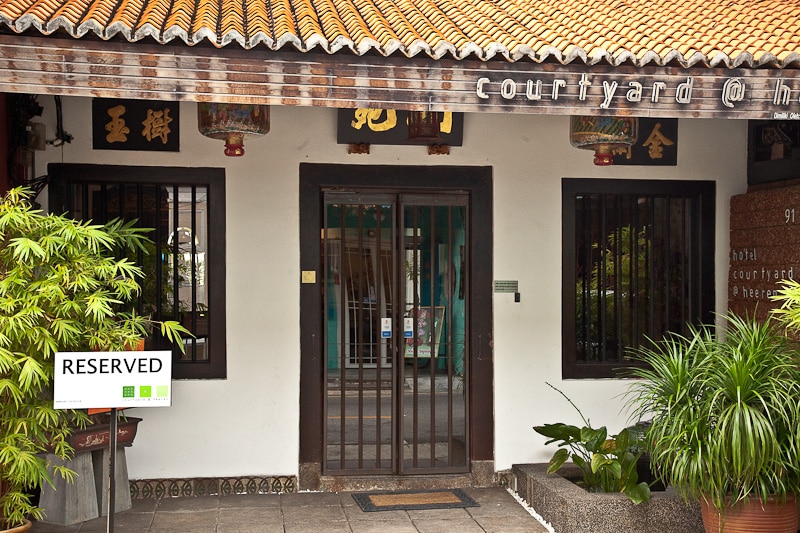 In the centre of Malacca you’ll find the pretty and perfectly preserved old town which, since 7th July 2008, is a UNESCO World Heritage site and the pride of the city. It’s also by far it’s most popular tourist destination with Jonker Walk at it’s heart. There are a number of roads near by, one of which is called Jalan Tun Tan Cheng Lock but back in the day was called Heeren. It’s where you’ll find a number of hotels with unsuspecting entrances, but you can’t miss one particular hotel, The Courtyard @ Heeren.

It’s large vertical green sign outside is the first give-away from a distance. Once you get up close the pretty little entrance almost seems like a modest chinese-malay house but don’t be fooled. While it may be thin, this boutique hotel is very long! The building is over 200 years old and stepping inside the air-conditioned lobby is like being transported to a cool oasis filled with fish ponds and impressive collections of antiquities.

There are 14 rooms in this boutique hotel, each one quite individual in it’s layout but with a recurring theme throughout of light and space. While the edges may not always be perfect, the ingenious use of colours, textures and materials really make for rooms quite unlike most hotels you may have stayed at.

As the name suggests you’d expect a courtyard somewhere in the vicinity. As promised there was one just beyond the lobby where you walk through the secure entrance to the rooms on 2 levels. A pretty little space with bonzai trees and other plants. One thing I didn’t expect was courtyards in most of the larger rooms, the deluxe and executive rooms feature tiny courtyards, just about big enough for a couple of people to stand in, usually accessible via the bathroom. They may be small but they do offer more light and greenery in to your living space which surprisingly does make a difference.

Our Superior room was well laid out and again had wonderful styling to make you feel at home. Contrasting dark woods with bright white walls and bed linen. The lighting is soft and diffused with a wall of windows to bring in more light from the main courtyard, thankfully all with wooden slats and curtains for privacy. Like the other rooms the bathroom is a great design feature. With the partition between the bedroom and bathroom made from panels of frosted and transparent glass. Letting light in above shoulder high with the rest concealing the bathroom. Coloured glass panes and black wooden framing really adds a nice touch to the room’s design. The glass serves to let light in to what would be a rather enclosed and dark area. A great solution and well designed. The bathroom is also a modern style with one of the best showers I’ve used in a while. A large shower head that hangs over you and rains a powerful tropical storm of hot water on you.

The beds at the Courtyard @ Heeren are firm and very comfortable. Possibly the deepest mattresses I’ve ever seen that are sure to give you a good nights sleep. The room also has a small desk for writing and making a coffee with the facilities provided. One thing the bedroom does lack is wardrobes or drawers. While there is a shelf with with hanging space underneath it there’s little other storage in the room. If you’re only staying a couple of nights it may not be that big an issue.

We enjoyed our brief stay at the Courtyard @ Heeren. It’s tardis like interior, well presented surroundings and friendly staff made this a pleasant stay I would recommend.