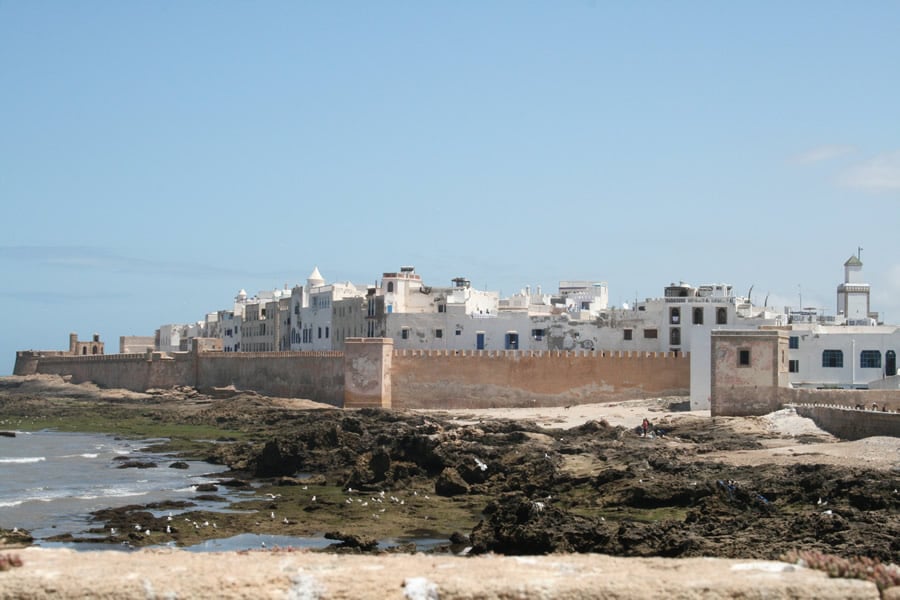 Essaouira is an old fortress town located on Morocco’s western Atlantic coast. The town, as it stands today, was built in the 18th century, although it existed long before then being called “Mogador”. It was a major trading post between Morocco and the rest of the world and attracted Portuguese and then French invaders.

It is a wonderfully atmospheric town with its fortress walls overlooking rocky outcrops that dip into the rough seas of the Atlantic on one side and behind it a Medina labyrinth of small, narrow streets, opening up into little squares with little shops selling everything from traditional Moroccan handicrafts to European confectionery. There is also a small sheltered bay, at the south end of the town with a sandy crescent-shaped beach, which is pleasant for swimming as it is sheltered from the rough waves of the ocean.
The town traditionally had a large Jewish population and there are remnants of synagogues and a Jewish cemetery there today. It is also a cultural town with many small art galleries. Each year there is a famous world music festival called the Gnaoua Festival of World Music, which attracts over half a million visitors each year around June. Orson Welles filmed “Othello” there and some say that Jimi Hendrix’s “Castles in the Sand” was written about Essaouira.

There are a few purpose-built modern hotels in or near the town, but most accommodation is in the form of Riads or small townhouse style hotels, spread out over several floors in charming, old Moroccan style houses.

The town has a lovely laid-back feel, with a fresh wind blowing off the sea, the sound of seagulls in the air and a small, busy fishing port. There are many top class restaurants in the town, especially serving fresh fish caught off the coast, as well as more down to earth cafes serving cous cous and sweet mint tea.
This post is brought to you by Cox & Kings, the longest established travel company in the world, which offers tailor-made holidays to Morocco and a wide range of destinations spanning the Indian Subcontinent, Latin America, the Middle East, Africa, the Far East, Europe, Australia, New Zealand, the South Pacific and the Caribbean.

Base Jumping from the Marina Bay Sands Hotel