A tour of the Angkor temples 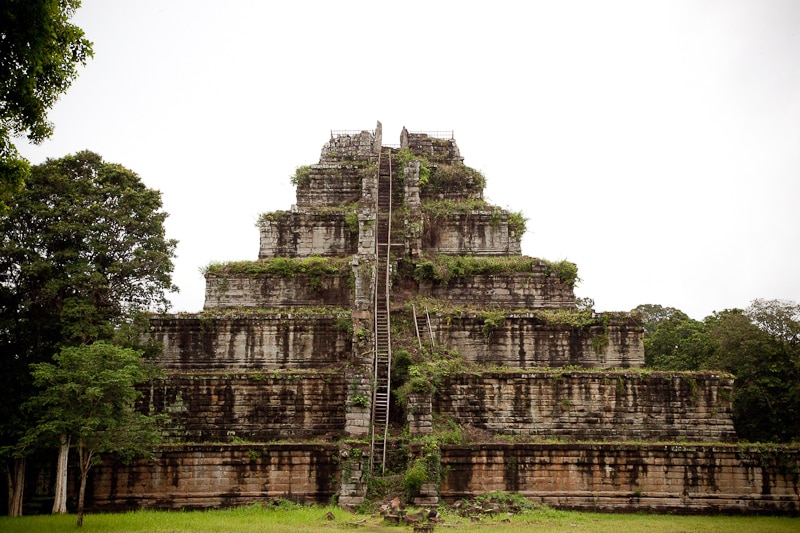 Cambodia is such a rewarding country. Only in recent years has tourism blossomed and its breathtaking Angkor Wat temples have become a global tourism hotspot. We recently had the privilege to re-visit Siem Reap in Cambodia and explore more of this stunning ancient buildings. Thanks to our new travel media partner Cox & Kings we stayed at the Victoria Angkor Hotel and had a private guided tour of some lesser known temple complexes.

Exploring the remote temples of Angkor

We met our friendly guide for the day at the Victoria Angkor hotel lobby who told us about our plans for the day. Cox & Kings organises luxury tours to Cambodia so we discussed with them our tour itinerary. We’ve previously been to the main Angkor temples when we came to Cambodia in 2009 so wanted to explore some of the lesser known temples in the region this time. There’s now around 50 open to the public and it’s impossible to see them all in one visit. Our air conditioned mini-van arrived at the Victoria Angkor hotel entrance and we headed off to the temples outside Siem Reap. Previously we’d seen the Angkor temples by tuk-tuk which, while lots of fun, we’ve been there and done that! I think I’d happily pick the mini-van over a noisy, bumpy tuk tuk any day! We also had a plentiful supply of complimentary chilled waters and hand wipes to stay cool. Our driver also cleaned the inside of the van after every temple we visited, wiping away the muddy footprints we brought in to his otherwise pristine van.

We set off on our journey through Siem Reap and out on to Route 6, our guide telling us more about the area and some fun stories of his life in Siem Reap and tourism in Cambodia. The drive to the Koh Ker temples is some 2.5 hours, fairly fast to begin with before the smooth road disappears and the bumpy, muddy roads begin to slow you down. The temples of Koh Ker are fairly substantial but due to their remote location and bumpy access they’ve yet to become a major tourist hotspot. Koh Ker was the capital city of Khmer Empire from 928 to 944 while King Jayavarman IV ruled. There’s a fantastic number of temples here, some have been restored, others yet to be and some lost to the jungle forever, all built around a central reservoir that was the city’s water supply. Our guide showed us around Prasat Prahm with its library buildings and tall single room temples. Prasat Neang Khmao was a personal favourite, stained black by fire, it stands tall and mighty while plants and trees attempt to grow in its cracks. We met 2 other tourists here, the only 2 we saw all morning in fact, who said we were the only tourists they’d seen for a day. The lack of tourists really makes for a more personal and emotional experience, it’s much easier to imagine the temples as they were over a thousand years ago, when there isn’t 2000 tourists wandering around, spoiling the views!

Prasat thom is one of the biggest temples in the Koh Ker region. A network of buildings and paths that eventually lead to a large stepped pyramid that dominates the landscape. There was once a ladder to help tourists climb the pyramid but lack of maintenance and heavy rain mean it’s no longer safe to climb. The view from the base is impressive enough. The ancient temples in Cambodia are quite a spell-binding sight. You could sit and stare for hours. This area will become more popular as the roads are being improved and new restaurant and toilet facilities are built. I would recommend visiting now while they are still tourist-free.

We drove back for an hour or so and stopped at a restaurant between villages. Serving local Khmer cuisine we were treated to an array of fantastic food including Fish Amok, served in a bowl made of fresh coconut.

Without doubt one of the best meals we had in Cambodia. It’s always nice to eat away from the city and tourist hotspots and the food was exceptional. You get to try some great local cuisine and watch the local rural life of Cambodia.

We spent the early afternoon exploring Beng Malea. Closer to the good roads, this temple complex is better known and is much like the famous temple of Angkor Wat. The great appeal of Beng Malea is that unlike Angkor Wat it has yet to be fully restored. Hundreds of trees still wrap themselves around walls and roofs of buildings here and piles of huge carved stones lay dormant after collapsing at some point in the last 1000 years. There are less tourists here too although more than you’ll find at Koh Ker. The abundance of trees and remote nature of this temple make Beng Malea a very different experience to Angkor Wat and our guide gave us ample time to explore this vast complex.
While visiting more remote temples means you’re likely to see less in one visit, they’re also a temple tour unhindered by crowds that can detract from their beauty. Having a guide with you can transform your experience from merely appreciating the temples for their majesty, to really understanding why they were built, by whom and what for. This background information means you really get the most out of your short time in Cambodia.

Check out our review of the Victoria Angkor Hotel in Siem Reap too.