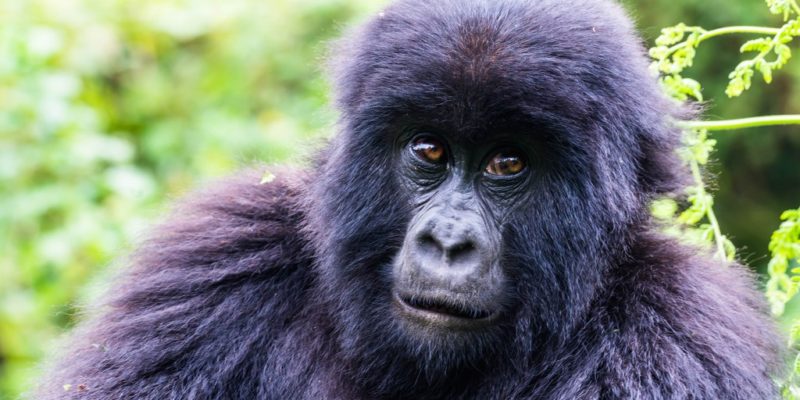 Visiting with mountain gorillas in Africa is a bucket list type of adventure, a once in a life time opportunity to meet the endangered mountain gorillas up close in the wild. The gorilla encounter is such a humbling and touching moment looking at these human like creatures who share 95% of human DNA. Gorilla Trekking was pioneered by Dain Fossey an American primatologist who committed her life to protecting and conserving mountain gorilla which were under the threat of extinction due to massive poaching, civil wars, diseases, local community encroaching on park land. Gorilla tourism is an income generating project which is highly benefiting and protecting the mountain gorillas as well as benefiting both the government and the local community making gorilla conservation being a responsibility of the benefiting government and the local communities.

Rwandan section of the Virunga conservation region, situated north east of the country, just 2 hours drive from Kigali capital city. In recent years, volcanoes national park has become a popular gorilla destination with many travelers adding it to their travel plan because of its ease in access. Unlike Bwindi, Mgahinga and Virunga national parks, Volcanoes is near the airport and city center. The park offers 10 habituated gorilla families, which have been grouped into simple medium and tough trek for travelers to easily select a perfect trek they can manage. 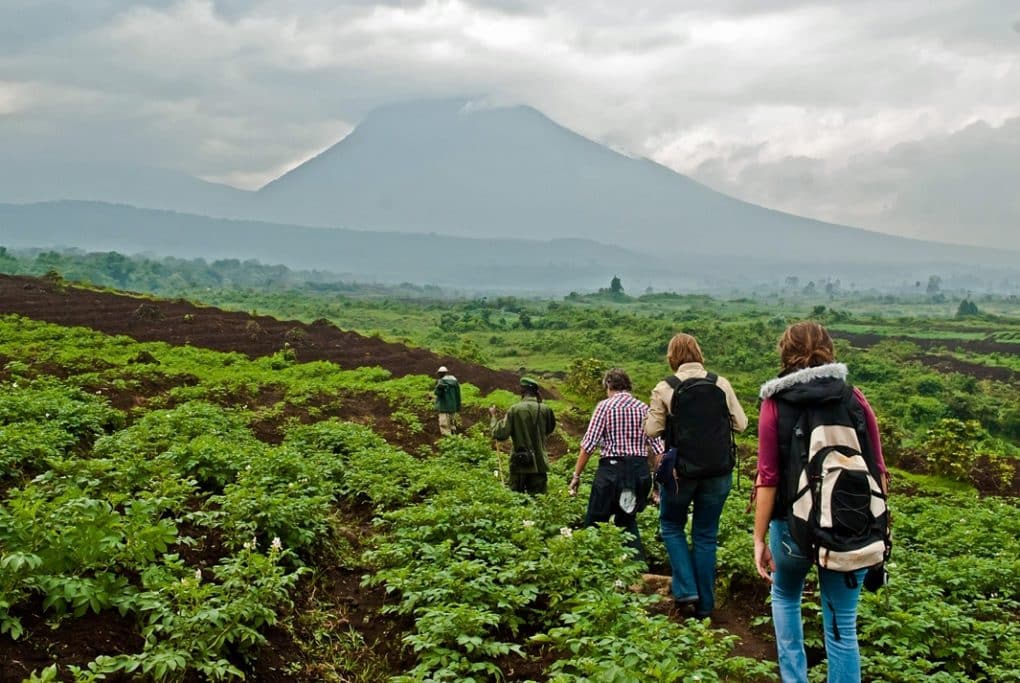 Volcanoes National Park is the historical home for Dian Fossey the American zoologist who established a gorilla research center on of the parks volcanoes called Karisimbi, her research did create a lot of awareness for conserving and protecting mountain gorillas when she wrote a book titled gorillas in the mist and later on the book featured in the film of the same name which has made it to feature in popular.

Bwindi national park is located in the south western Uganda on the edge of the western wing of the great East African rift valley covering an area of about 321 km with four gorilla trekking sectors that were created by the Uganda Wildlife Authority (www.ugandawildlife.org). The park is situated 500 -600 km from Kampala and 8-9 driving hours. 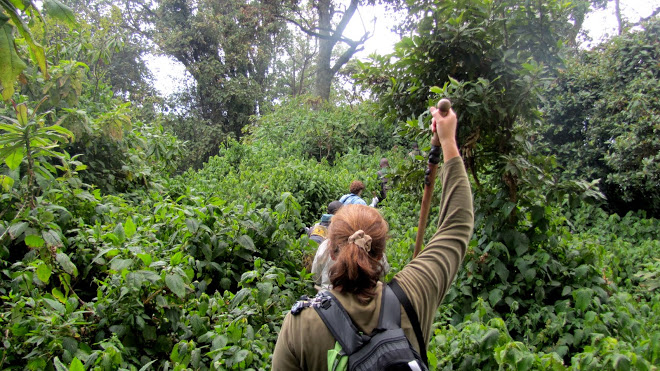 Bwindi national park comprises of 11 habituated gorilla groups with 2 other groups set aside for gorilla habituation experience. Among the sections of Bwindi forest is Buhoma sector where the park headquarters are found, Nkuringo, Rushaga and Ruhija sectors. Each of the sectors has got more than one gorilla groups that were habituated for tracking; the Buhoma sector has three groups of Mubare, Habinyanja and Rushegura.

Nkuringo sector situated about 10 km from to Buhoma  has only one gorilla family that has been habituated for tracking that is the Nkuringo group and the Ruhija sector considered to be most inaccessible than all the four sectors. Ruhija has three gorilla groups of Bitukura, Kyaguriro and Oruzogo.

The Rushaga sector which is found between kabale and Nkuringo has four gorilla groups which include Mishaya, Nshongi, Kahungye, Busingye and Bweza families.

The park is accessible mostly either by use of public transportation or by air from Entebbe International Airport to Kajjansi or Kihihi air fields  which are close to the park, flights can only be  possible only with scheduled charter flights. Alternatively the park can also be accessed by road with various routes about four different routes leading to the park from Uganda’s capital city Kampala which include the following:-

Kampala –Ntungamo –Rukungiri route is quite quick and direct than the rest of the routes, it is about 390 km from Kampala following a tarmac road from Kampala to Rukungiri town and then proceed with a murram road to Buhoma about 82 km from Rukungiri

The Kampala –kabale –Kanungu – Buhoma route is about 414 km from Kampala to kabale taking about 6-8 hours although long but full of en route attractions followed by a murram road via kanungu to Buhoma for about 120 km and you should use a 4 WD vehicle.

Kampala – kabale- Ruhija – Buhoma route is almost the same as the above except for the additional distance from Ruhija to Buhoma can take about 3 to 4 hours covering 95 km.

The Kampala – kabale Nkuringo route, from Kampala to kabale is a tarmac followed by the an extra distance from kabale to Nkuringo of about 105 km taking about 4 hours of driving on a murram road.  The en route town of Kisoro is at times preferred by tourists who wish to spend a night before they proceed the next day to Nkuringo for gorilla tracking

Lastly there is a route that passes through Queen Elizabeth National Park via Ishahah sector to Buhoma in Bwindi impenetrable forest national park.

Mgahinga National Park is one of the smallest national parks in Uganda covering about 33.7 km but most important it offers habitat for endangered mountain gorillas, found in the remote south western part of Uganda contiguous with Volcanoes National Park in Rwanda and the Virunga Mountains National park in the Democratic Republic of Congo at an altitude of about 2,227 m and 4,127 m above sea level, the park was created to protect mountain gorillas as well as the rare golden monkeys that are also residents in the park. The park has only one habituated group of gorillas called Nyakagezi, even though this group used to cross borders to Rwanda in the past, it has now stabilized staying in Uganda which makes it a good spot for viewing mountain gorillas than it used to be in the past few years.

The gorilla group in Mgahinga national park has only ten individuals including four Silverbacks which inhabit the striking features of the park that include the three extinct volcanoes that form part of the bigger Virunga conservation area.

Provided the two national parks that shelter the rare mountain gorillas which are all found in the south western Uganda are suitable for travel at any time of the year but expect that it nevertheless a simple experience but rather requires one to be physically fit in order to trek through the thick rain forests and steep ridges.

When to go gorilla trekking

The best season to trek the mountain gorillas is the dry season which normally starts fro mid December to February and June to September but nevertheless expect a tough trek on foot maneuvering through the forests. Generally weather conditions in the rain forests are unpredictable; it’s sometimes humid, and wet tangled vegetation implying that you are not guaranteed to see the gorillas depending on the movement of gorillas and time taken by trackers and guides who closely follow their footsteps until they locate where a particular gorilla group is located. 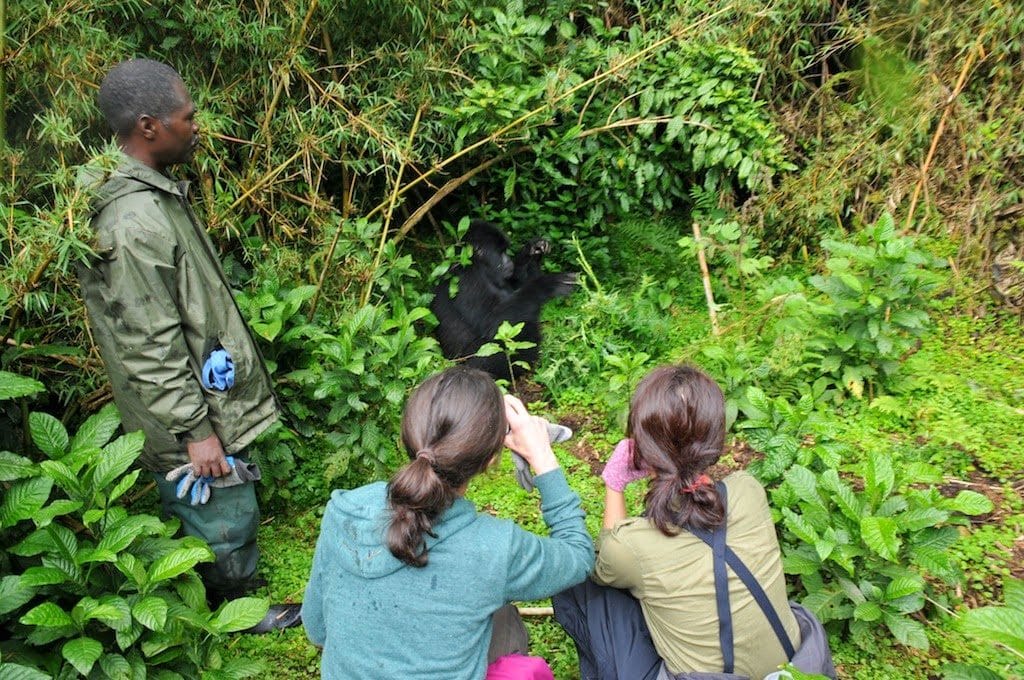 On the other hand the rainy season begins from March –May and October and some little rains that fall in November, this is regarded as the a low season characterized by few numbers of tourists because of fearing too much wet conditions that seem difficult. Conversely this is the season when the rain forests are much lush therefore plenty of vegetation is available and gorillas are most likely not to move for long distances presenting more chances of viewing gorillas within short hours from the start of the trek.

Mountain gorillas in the Democratic Republic of Congo are found in the Virunga mountains National Park found in the eastern Democratic of Congo on the border with Rwanda and Uganda. The park is a UNESCO world heritage site and covers an area of about 7800 km of rain forests inhabited by about 200 gorillas that stay in the southern parts of the park most of the times. On a sad note rebel activity that took place in the forests about seven years ago, had many gorillas killed which affected their population and made the park less visited, however after the overthrow of rebels recently, gorilla population in the Virunga National Park has recovered and the park can be visited without any threat of attacks thanks to the work done by rangers who have assiduously protected the park.

Virunga National Park can be accessed by road transport from Kigali Rwanda which can take about 3 hour drive to the border with Democratic Republic of Congo near the town of Goma. From Goma town it’s about 32 km to reach the park and transportation is available but should be arranged with the park.

The only advantage of tracking gorillas in DRC is that there are fewer tourists visiting gorillas hence you are likely to enjoy a private trek with your guide than in Rwanda and Uganda. 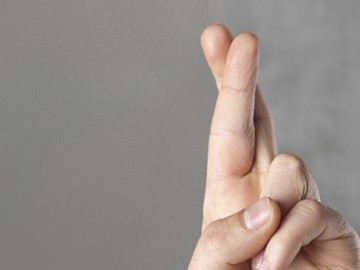 Superstitions From Around the World 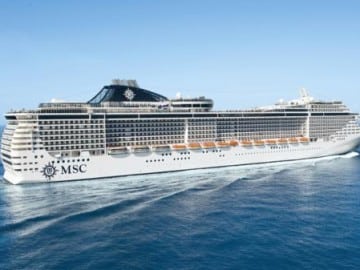 3 mistakes to avoid on cruise holidays