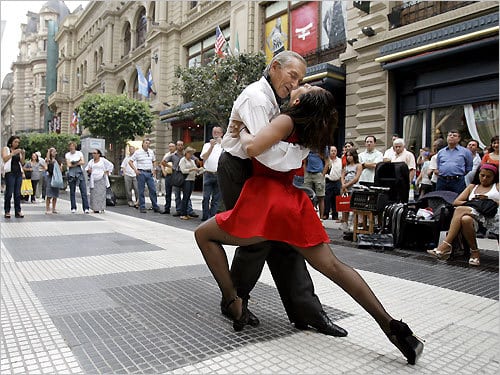 Popularly known as the Paris of the South, Buenos Aires is a great metropolis packed with cultural and historic gems and set in breathtakingly beautiful natural surroundings. It is famously the home of the tango, a dance which encapsulates its exoticism, barely controlled energy and sheer sexiness. The River Plate on which it lies is actually a great estuary, and although the Eiffel Tower is absent there’s a definite Parisian atmosphere especially in the evenings.

As the clubs, discos and bars open and you sip a cocktail on your balcony or terrace you might almost be looking across the Seine to the Left Bank. The European charm of Buenos Aires combined with the knowledge that just a few miles inland are the vast rainforests and remote tribes of the interior, adds that frisson of excitement to any visit to this exotic city.

In February most of the population will have gone off to beach resorts in Uruguay or Mar del Plata, and as the weather is pleasantly warm and humid this is the perfect time for strolling around the sights without being endlessly jostled by the crowds who head here in the January high season.

Buenos Aires is a modern city, and although it was settled by Europeans centuries ago it has been largely rebuilt since 1900. Many of the older buildings have simply been swept aside but the city plan remains as it was in colonial days. Narrow passages at the centre of the Old Town radiate from the historic Plaza de Mayo, just as in many a modern Spanish city, and the old Town Hall (Cabildo), where independence from Spain was planned, is still there. As you’d expect from a city erected by Spanish settlers it has a cathedral at its heart, this one housing the relics of St Martin

Buenos Aires derives its fascination on the ground not so much from particular buildings as from the fascinating contrasts between its 48 separate barrios or districts. Each of these has its own unique character and atmosphere, with for example the barrios of Belgrano and Palermo being posh neighbourhoods lined with mansions and at the other end La Boca and San Telmo more Italian and working-class but exuding charm and warmth to visitors. As with most cities, head for the poorer parts for the friendliest welcomes.

Places to go in Buenos Aires

The famous Colon Theatre was opened in 1908 and is a leading lyric theatre, with 2500 seats. It’s actually what you and I would call an opera house, and legendary performers from Caruso to Maria Callas and Pavarotti have appeared here. Nowadays it’s popular for tango performances, and you can get a guided tour backstage.

Despite the modernity of Buenos Aires, there are several important older structures surviving and one of the best and most atmospheric of these is the Iglesia del Pilar. Anyone who’s ventured into the cathedrals of Seville or Toledo will know what to expect in here: magnificent silver altar, elaborate ironwork grilles, agonies of the saints, candles incense. This is in fact one of Argentina’s premier pieces of colonial architecture and the Inquisition would no doubt have felt right at home as they piously bent their heads to go through the skulls and bones of the main entrance. Definitely worth checking out on a visit to Buenos Aires.

To sample the Latin American charm and dynamic nightlife, historic buildings and contrasting barrios of this great city, short-term apartments in Buenos Aires are in abundant supply. You can get anything from multi-room self-catering apartments to guesthouses that supply bed and breakfast only, one- and two-bed apartments and entire hotel suites. The choice depends on budget and preference, but a small apartment in the Palermo barrio, for instance, will see you close to the main places of interest and with dining and entertainment venues practically on the doorstep.